Here’s a menu of tasty seaside treats, from scenery to seafood. Take a trip along the coast with us from north to south, calling in at big beaches and whispering sands (we’ll explain that one later), with some foodie favourites thrown in to whet your appetite.

Where the sands go on forever

That’s what it seems at Dinas Dinlle on the northern approach to the Llŷn Peninsula. If you like boundless places with an overpowering sense of space you’ll love this west-facing beach. Go on, breathe it all in. One of the world’s best beach bars

The Tŷ Coch Inn came third in a global poll, ahead of bars in Australia, Florida and South Africa. It’s a pebble’s throw from the beach at the perfectly preserved National Trust coastal village of Porthdinllaen. Cars are banned, so that pint tastes even better after your walk across the sands to get there. Porth Oer’s sands really do whistle – or at least squeak beneath your feet because of their unusual granules. It’s a small, picturesque, pristine beach, a classic of its kind and perfect for a picnic – which should, of course, include a hunk of premium local cheese from Pwllheli-based South Caernarfon Creameries, Wales’s leading farmer-owned dairy co-operative. 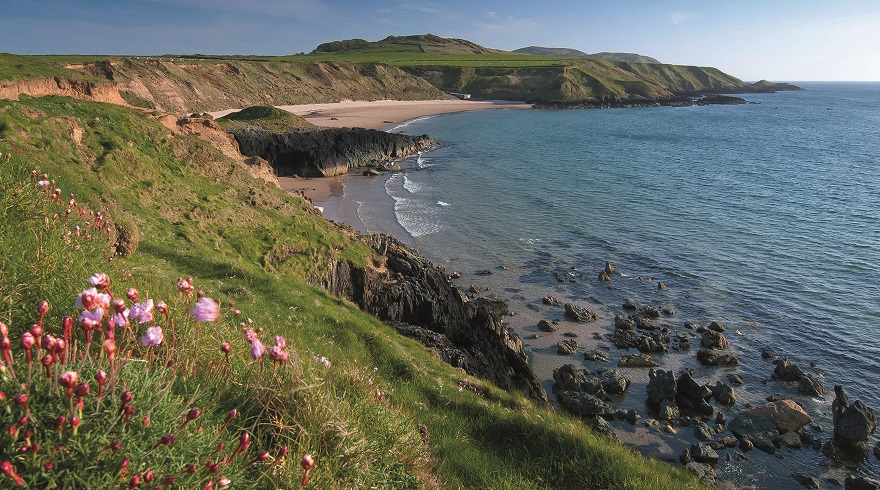 You may well be familiar with Llanbedrog beach even if you’ve never visited. Its candy-coloured beach huts attract travel photographers (and Instagrammers) like bees to a honeypot. The huts look out across a mile of sands, one of the calmest beaches in Wales, sheltered by Mynydd Tir-y-Cwmwd, a prominent headland guarded by a lone statue known as the Tin Man. Two for the price of one

Pwllheli, the Llŷn Peninsula’s unofficial ‘capital’, boasts two excellent beaches. Promenade-backed Marian y De (also known as South Beach) stretching towards Llanbedrog is the most popular, while ‘best-kept secret’ Glan y Môr runs in the opposite direction from the marina. Castles of sand and stone

Build a sandcastle on Harlech’s huge beach, then visit the real thing. Medieval Harlech Castle, a World Heritage Site, looms above the sands. This ‘four miles of empty white sand (is) perfect for families with a wild streak,’ says The Sunday Times. It recommends that you ‘build a driftwood fire … and barbecue any fish you’ve caught.’ 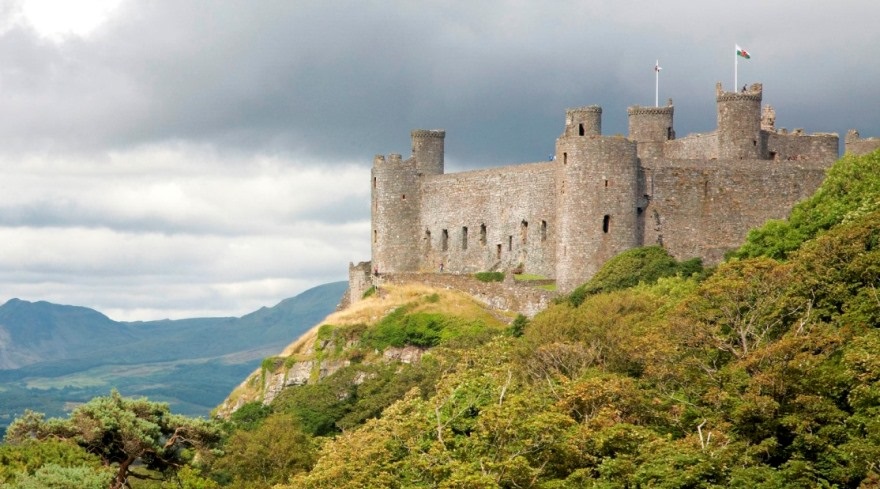 No prizes for guessing what Shell Island is famous for. Apart from shores full of seashells it’s also known for its wild flowers and peaceful sandy beaches. Don’t worry, you won’t need a boat to get here – there’s a causeway. The mouth of the Mawddach

That’s Barmouth (Abermaw in Welsh), the most popular resort in southern Snowdonia. It’s easy to see why – lots of space on sands that never get crowded, a setting beside Wales’s loveliest estuary, and a picturesque harbour dotted with historic buildings recalling Barmouth’s maritime past. West-facing Tywyn beach is another biggie – around five miles long and partially backed by dunes. It’s great for surfing and other watersports, and for families there’s a promenade and paddling pool. Oh, and the local waters are also popular with harbour porpoises and bottlenose dolphins (they’re everywhere along Cardigan Bay). 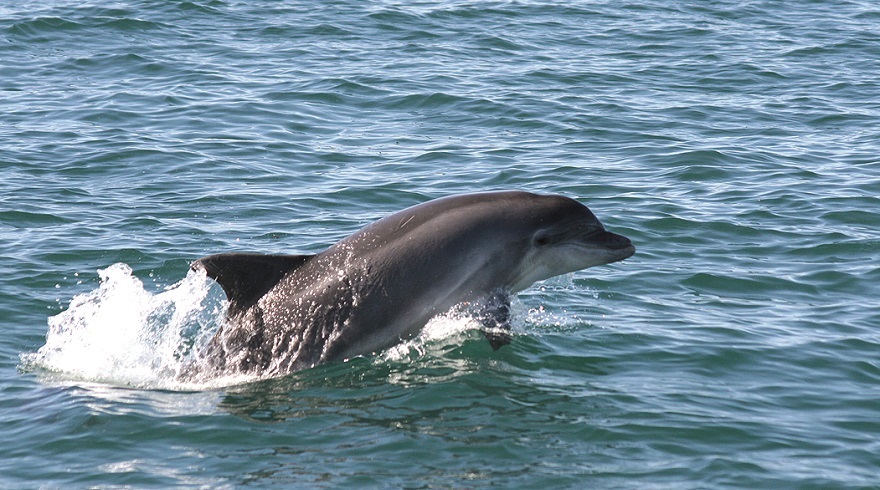 For Whom the Bell Tolls

The bell suspended below the quayside at rings as the tide rises, in homage to the legend about bells from a lost kingdom ringing beneath the sea. A visit to this charming resort and sailing centre should be high on the list of connoisseurs of coastal beauty. Small (apart from its sizeable beach) and perfectly formed, it’s little wonder that Aberdyfi’s seafront houses are some of the most expensive in Wales. 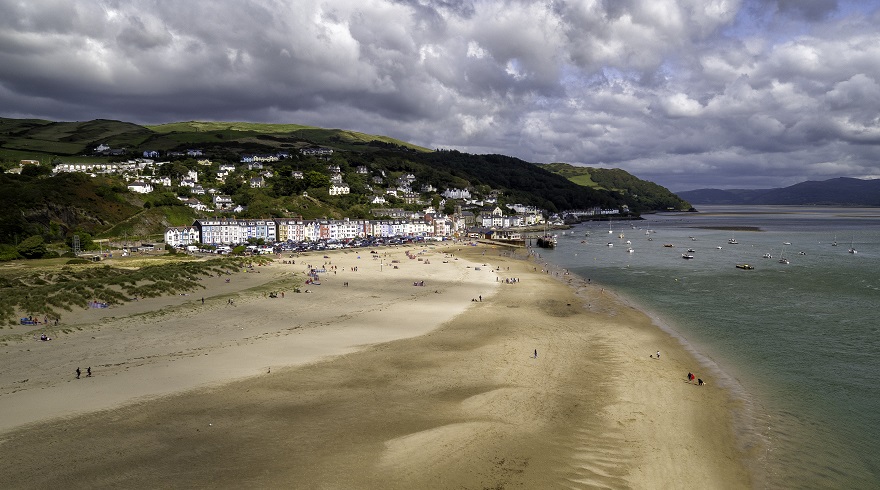 Aberystwyth, Mid Wales’s ‘capital’, fulfils at least three roles – seaside resort, university town and shopping/administrative centre. Its Victorian character still shines through, especially along the curved promenade and beach sheltered by Constitution Hill. There’s a buzzy café culture, and an excellent choice of places to eat. Try Pysgoty, the highly rated fish restaurant on the harbour where your catch of the day is landed, or Ultracomida, the artisan deli and restaurant on Pier Street.

Take an epic fishing trip from New Quay harbour into the abundant waters of Cardigan Bay. Experienced and novice anglers are welcome on these fishy, fun-filled trips where you can catch everything from mackerel to bass, sea bream to plaice (there’s nothing like fresh mackerel on the barbecue afterwards). If you’re a landlubber, stick to New Quay’s sheltered, sandy beach, arcing around from the harbour.

The little village of Llangrannog boasts a pair of beautiful beaches. The main beach is conveniently located smack in front of its pubs and cafés (make sure you try the locally made ice cream). If you’re feeling adventurous, head to Cilborth beach just north of the village. Reached via steep steps down the cliffside (or from Llangrannog at low tide), it’s surrounded by rockpools and caves.

‘The jewel of Cardigan Bay’

Considering the high standard of the competition, for Mwnt to attract this description must mean that it’s an extraordinary place. Perhaps that’s because there’s really nothing here – apart, that is, from a starry beach scooped from green headlands and topped by a solitary little church, dazzling in its coat of whitewash. Just perfect.

Poppit Sands marks the start (or finish, depending on your direction of travel) of the Pembrokeshire Coast National Park. It’s a long, sandy, dune-backed beach at the mouth of the River Teifi, with splendid views across to Gwbert on the opposite bank. 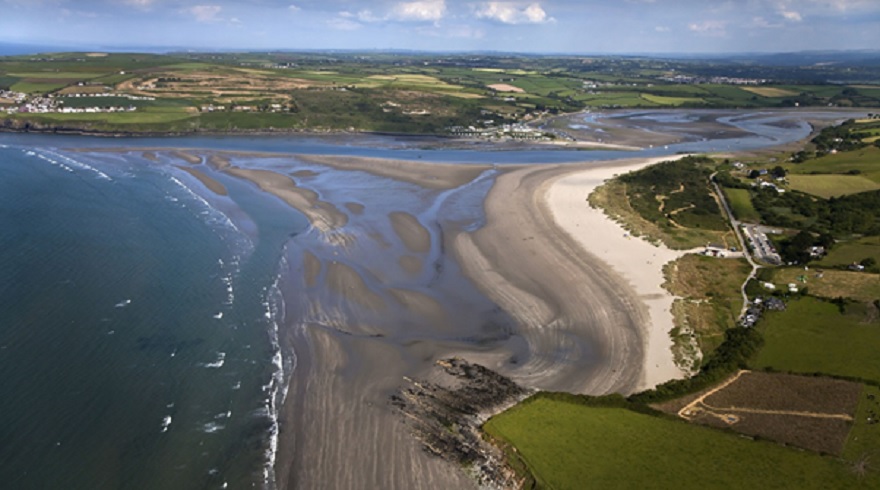 For the ultimate sandwich to accompany all that sand, you won’t do better than the home-baked bread (plus other local goodies) from the deli at Newport’s Blas at Fronlas. Mind you, you may instead opt for the food served at Blas’s fabulous little café. If you’re in the DIY food mood, take your sandwiches to Newport Sands for a picnic on this broad beach at the mouth of the River Nevern.

The coastline from Newport to St Davids is rocky, serrated and wild. See it at its best from the coast path – highlights include Dinas Head and Strumble Head, either side of Fishguard. 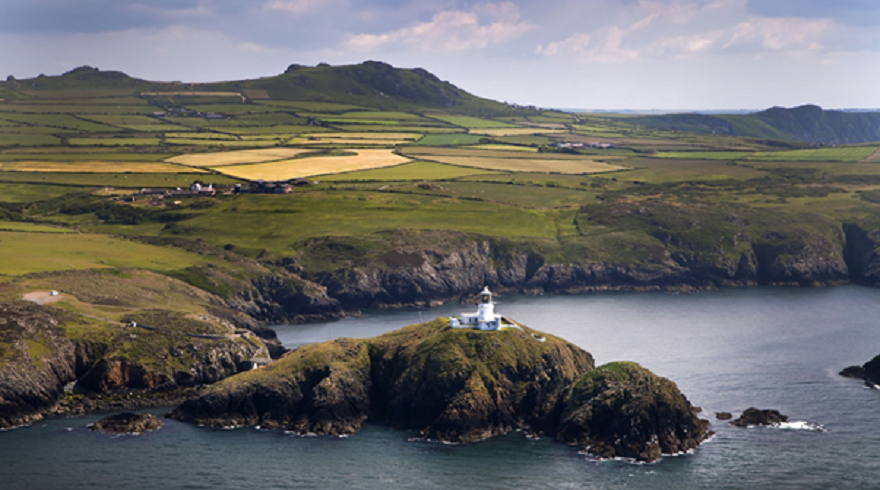 Whitesands Bay, a mile or so from St Davids, is popular with families and surfers. Its fine white sands attract the former, while the latter flock here for excellent surfing conditions – some of the best in Wales – with waves up to 10ft/3m.

Around St Davids Head, the next place you come to is Solva, a snug harbour sheltered from the sometimes-stormy waters of St Bride’s Bay by a ½-mile tidal inlet. You could once sail from here to America for the princely sum of £3 10 shillings. That’s not going to get you far today when you browse the tempting array of craft shops and galleries that now bring lifeblood to this former trading port.

West-facing Newgale is another exemplary surfing and kitesurfing beach that also attracts families. Newgale itself is no more than a small village, completely dwarfed by its 2½-mile beach.